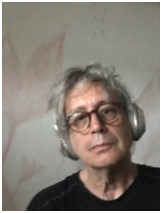 By the age of 23 Lazerus moved into Record Production professionally, soon working with artists including Donald Fagen, Steely Dan, The Call, Diana Ross, Jean Michel Jarre, Violent Femmes, Tom Jones, Laurie Anderson, Stevie Wonder, Mike Oldfield, Eddie Murphy, Bruce Willis and directors Martin Scorsese and Clint Eastwood. He also worked on music for two Sundance Winning Films “Dig!” and “Fuel”. Throughout all of this, Lazerus has worked with some of the greatest studio musicians known including members of the infamous “Wrecking Crew.”

Lazerus has been involved globally on creative projects from Manhattan to Paris, Iceland to Ireland and continues to travel and create. His current focus includes interests in Virtual Reality, Immersive Domes and Augmented Reality. He has a Master’s degree in Consciousness Studies and is working on a novel, a 13 song-cycle about Dreams (for Naxos International and NXN Recording), new contemporary album tracks with Norwegian Singer/Songwriter Heidi Torsvik, a conceptual Dome project and he has a great love of film and TV scoring. His newest project is a musical transmedia project called, “Hidden Soul Of The Fjords” which has been signed to Naxos International Record Label and will be released in the fall, 2020.