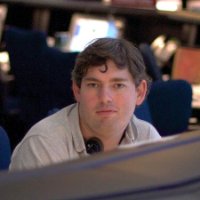 A space enthusiast from an early age, Ellison spent 8 years as a multimedia producer for a medical training company before gaining the attention of NASA's Jet Propulsion Laboratory where he has been a Visualization Producer since 2010.

Work includes technical director for Eyes on the Solar System and the Spacecraft 3D AR App and technical lead for the Mars Science Laboratory landing animation.

He is also an Engineering Camera Payload Uplink lead on the Curiosity and Opportunity Mars Rovers.

In 2013 he was awarded an Honorary Doctorate in Design by his Alma mater, De Montfort University in Leicester, England.